Claret, maroon, deep red, oxblood. I'm not sure what to call this colour, but I love it. It's possibly one of my all time favorite colours. 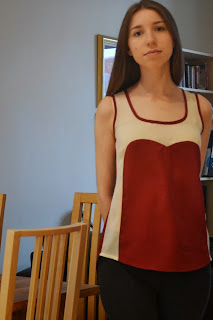 I've used the Polly top pattern here, a freeby from indie pattern company By Hand London. I'm a sucker for a freeby, so when I saw this pattern advertised, I knew I had to use, and use it soon. I had slight problems with it being a printable pattern though. I don't own a printer, so I ended up registering with the library and paying to use their printer. I probably didn't save that much money in the long run, but now I'm a fully signed up member to the local library, I might actually start using it. 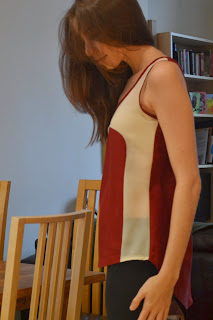 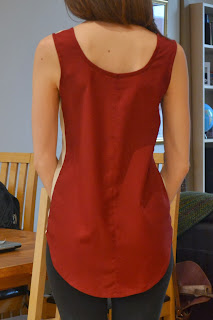 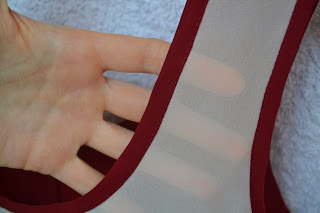 I've made two alterations to this pattern. The first thing I did was change the top of the front panel to a heart shape. I love the original pattern, but I wanted to give it my own twist. The second change I made was to lengthen the back panel. The fabric I used is incredibly floaty and I wanted a long back for extra swooshiness. 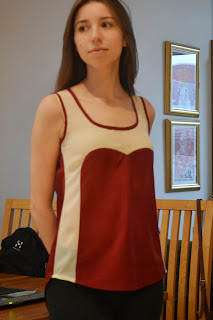 By Hand London advises you to use one colour for the centre panel and binding and one colour for the rest of the top. I decided instead to use the same fabric for the back, centre front panel and binding. The outer front panel is made from a very sheer fabric and it simply wouldn't have worked if I'd used it for the back. Well, it might have worked if I was willing to go braless. But I'm not.  Anyway, I like the peek-a-boo effect of using sheer for the side panel, leaves something to the imagination ;)

The top looks simple enough to make, but don't be fooled! The biggest challenge was attaching the centre front to the side panel and sewing the binding. I used a very slippy fabric and every time I tried to sew a bit, another bit would slip out of place. After many attempts and frustrated unpicking, I decided to hand sew much of the top and then machine sew it in place. Dedication. 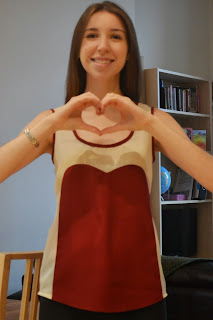 After finishing this project, and reflecting back on other projects and other blogger's posts, I've learnt a few things for the future:

1) When cutting slippy fabric, make sure you sharpen your scissors as much as possible. Cutting was made so much easier once I'd sat down and sharpened my scissors for a few minutes. Scissor sharpeners are really cheap from most haberdasheries.

2) Think about the fabric you use. I spent a bit of time envisaging how I wanted this top to look. I wanted something really feminine and floaty so a lot depended on the drape of the fabric. I became a bit unstuck when I originally bought some different fabric for the side panel. When I got it home, it was way too stiff and heavy. I ended up buying the sheer fabric and it was a much better choice.

3) Weight the pattern pieces down with heavy objects before you start pinning them to the fabric. This helped a lot, especially with slippy fabric.

4) Go slow and take your time. Quite often I want to rush my projects because I'm so excited about getting them finished and then I mess them up. I decided to take more time over this top and unpick things if they weren't right. Even if it meant hand sewing parts of it. The result is much better quality than what I'd normally make and means the difference between having something perfect that I feel proud and having something a bit crap that I'd never wear.

5) Sign up to your local library. They're a dying breed and they need using. They're really nice inside too, and much better than buying new books all the time.